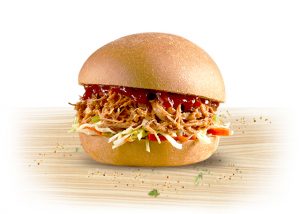 For KFC’s latest promotion starting 14 June 2016, KFC are branching away from chicken and into pork by introducing the brand new Kentucky Pulled Pork Burger!

The burger is available by itself for around $6.00, in a combo with a regular chips and drink for $8.95, and in a Kentucky Pulled Pork Burger Boxed Meal, which contains the burger, chips, drink, a piece of chicken, snack popcorn chicken and potato and gravy for $12.95.

This isn’t the first time KFC has branched out into meats other than chicken (but might be the first time nationwide). Previously, KFC Australia have trialled the Fish Zinger in Tasmania, as well as beef burgers in various areas. (thanks to a comment from our reader Bob below)

If you’ve tried this new burger from KFC, let us know what you think in the comments! It’s available for a limited time only – until the 11th of July 2016.

For more of the latest KFC deals and offers, click on one of the links below. Or to locate your closest KFC store, click here.

Click here for more KFC news and deals. For more food news, deals and reviews in general, visit our home page or like us on Facebook!

Have any thoughts about this deal? Let us know in the comments.