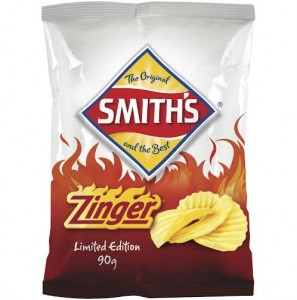 But now, get your taste buds ready for an unholy combination between snack food and fast food. Smith’s and KFC have teamed up to launch Smith’s Zinger Chips – not the hot chip kind, but the thinly sliced kind that you’d find in packets at the supermarket.

They should be available at Coles stores now or in KFC stores starting September 8, launching together with their new Original Recipe Chicken Tenders.

Here are some review quotes from around the web to whet your appetite:

The seasoning is well distributed on the chips so you’re bound to discover the taste. The one thing lacking though is the actual chicken which does remove an element of the flavour normally in a Zinger. As a chip though it’s great.

The smell is strong with this one, a pleasant almost barbecue aroma that intensifies the long, zesty flavour. The flavouring isn’t caked on so you won’t get your hands dirty, but there’s a nice subtle balance of zinger chicken that carries through to the after taste.

Can confirm: strong aroma that stings the nostrils, vague KFC chip situation on your palate and zingy aftertaste.

If that’s not enough, here are a couple of PR quotes from Smith’s and KFC…

Smith’s are always looking to excite fans and what better way than partnering with KFC and their Zinger flavour. We love the opportunity to share these ideas with consumers and can’t wait to see Smith’s Zinger Chips being shared at BBQ’s or footy games around the country!

Zinger Burgers are the most popular burgers at KFC Australia. We’re so excited to bring this iconic flavour to consumers in a new way, giving it to our customers in an on-the-go, any time, always available product. With Smith’s Zinger Chips, your favourite flavour is at the ready to be enjoyed both in and out of our restaurants

Tried Smith’s new Zinger Chips? Let us know what you think in the comments. For plenty more KFC news and deals on Frugal Feeds, click here.