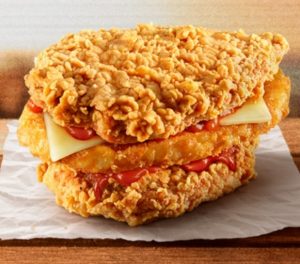 Unfortunately this promo is not currently available so you may also want to check out some of the other current promotions available, including:

KFC have introduced the Zinger Tower Double, exclusive to the App Secret Menu on Tuesday 23 February 2021!

You can also get the other following items on the secret menu – Kentucky Snack Pack and Triple Stacker Burger – click here to read more about the whole secret menu!

Then when the menu appears, drag the screen down until a cartoon Colonel Sanders appears. Afterwards, the “Secret Menu” button will appear.

To get the app, you’ll need to be in a region where KFC App ordering is available, and then you’ll need to download either the App Store or Google Play app on your phone – we’ve included the links below:

If you’ve tried this latest offer from KFC, let us know what you think in the comments! Otherwise, for more of the latest KFC deals and offers, click on one of the links below.

Click here for more KFC news and deals. For more food news, deals and reviews in general, visit our home page or like us on Facebook!

Have any thoughts about this post? Let us know in the comments.