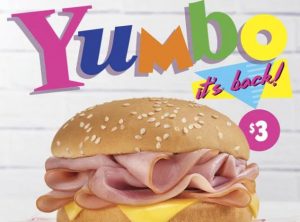 Starting Tuesday 20 April 2021, Hungry Jack’s are bringing back the Yumbo for $3!

We previously posted that Hungry Jack’s had brought back the Yumbo at selected stores back in February 2019 – but this time it’s back nationwide!

The Yumbo was previously available in the 1970s and 1980s until it was discontinued in 1991 (via News/OzBargain).

Have you tried Hungry Jack’s Yumbo? Let us know what you think in the comments!

For more information on some of the latest Hungry Jack’s offers, click on one of these links!

For more food news, deals and reviews in general, visit our home page or like us on Facebook! Have any thoughts about this deal? Let us know in the comments.